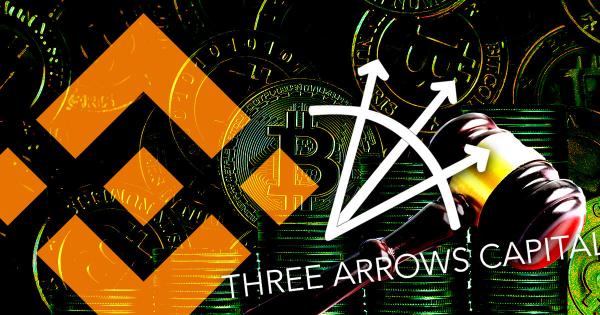 Polygon co-founder Sandeep Nailwal went on the defense against “ecosystems who are feeling defeated & jealous.”

The comment was motivated by a tweet from Mert Mumtaz, the co-founder, and CEO of Helius Labs, who pointed out Polygon had received more VC money than Solana and had used the funding to “pay people to use the chain and acquire companies.”

Binance’s Bitcoin (BTC) reserves collateralization is in excess of 100% as of Nov. 22, when a snapshot of its total liabilities and reserves was taken, according to financial auditor Mazars.

To arrive at this result, the auditor considered in-scope assets lent through margin and loan service offerings that are collateralized by out-of-scope assets.

OneCoin crisis manager Frank Schneider to face trial in the US

The U.S. Department of Justice (DOJ) has revisited its case against Frank Schneider who served as the Crisis Manager for OneCoin — a $4 billion scam project.

OneCoin was a crypto-based Ponzi scheme led by Bulgarian national Ruja Ignatova in 2014. The scam project collapsed in 2017 after raising about $4 billion from investors across 175 countries. Since then authorities around the world including the DOJ have been trailing its masterminds.

The comments came during a CNBC interview in which he also disparaged the media outlet for its extensive coverage of the crypto industry.

Crypto.com CEO addresses FUD, says he ‘has nothing to hide’

Crypto exchange crypto.com‘s CEO Kris Marszalek posted a thread on his Twitter account to acknowledge that more FUD targeting crypto.com is coming and that he had “nothing to hide.”

Liquidators of Three Arrows Capital (3AC) have received approval to issue a subpoena to co-founders Su Zhu and Kyle Davis.

Since Three Arrows Capital filed for bankruptcy on July 1, Su Zhu and Kyle Davis have allegedly been on the run and evaded every attempt to provide details of the financial dealings of their hedge fund.

However, a U.S. bankruptcy court has approved a request to issue a subpoena for the 3AC founders. Zhu and Davis have been mandated to turn over and disclose all financial information related to 3AC to approved liquidators within 14 days, effective from Dec. 6, 2022.

The US Department of Justice said it has arrested Rikesh Thapa, the former chief technology officer of a blockchain company, for allegedly defrauding his company of over $1 million.

The DOJ did not name the company in its Dec. 7 news release.

Thapa’s LinkedIn reveals that he co-founded the blockchain company Blockparty in 2017 and served as its CTO up until 2019.

According to the DOJ’s filing on Dec. 7, Thapa allegedly defrauded his company of cash and crypto assets worth over $1 million.

Bitcoin miners are facing a challenging time due to ongoing price uncertainty and global energy shortages.

In addition, macro factors have conspired to raise the cost of borrowing, while access to capital is also drying up as risk appetite dwindles in the face of recessionary pressures. This situation is particularly bad for publically traded miners, who typically borrow to fund the purchase of mining equipment.

What’s more, with the price of Bitcoin floating in and around two-year lows, profitability remains tight for all but the most efficient miners.

On-chain Glassnode data analyzed by CryptoSlate reveals, since August, the BTC held by miners has dropped significantly. However, it is unclear whether this was driven by the need to offload at exchanges.