Litecoin has experienced a price resurgence during chaotic market conditions. On-chain metrics suggest investors are hodling LTC, rather than spending it. 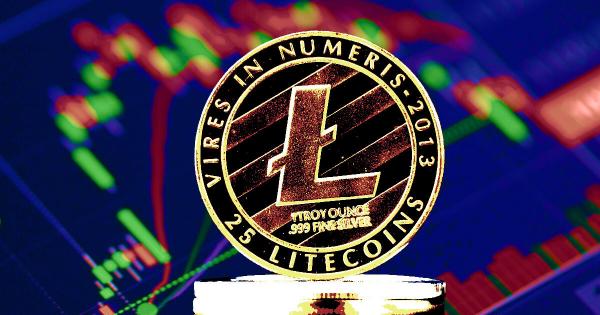 Litecoin bucked the market downtrend, posting 19% gains over the past week to lead the top 100.

As a result, Litecoin continues climbing higher on the market cap rankings. Excluding stablecoins, this positions LTC in the top 10 to rank 9th, leapfrogging Shiba Inu in the process.

CryptoSlate reported that Litecoin’s resurgence is likely due to the market seeking stability amid the FTX fallout.

Since FTX began showing signs of insolvency, market cap outflows have totaled $228 billion, leading to tanking token prices. Especially in respect of FTX-affiliated projects, including FTT and SOL, with the former now languishing outside the top 200.

Commenting on the chaotic market conditions of late, the Managing Director of the Litecoin Foundation, Alan Austin, recently asked, “Have you guys had enough excitement yet?”

Austin was referring to Litecoin’s “boring” reputation, which lacks glamor but offers holders a high degree of stability in return.

Barring Bitcoin, Litecoin is perhaps the most solid cryptocurrency in terms of longevity, with 11 years of history in and around the large caps to back this up.

Analysis of Glassnode data suggests users increasingly view Litecoin as a store of value instead of a payment token – which is its primary use case.

Since Q1 2021, the amount of Litecoin hodled or lost continues to grow steadily over time. The chart below shows approximately 20 million LTC currently falls into this category.

Revived Supply Last Active 5+ Years refers to the amount of Litecoin inactive five years prior to the data point. The chart below shows a peak in inactive supply in late 2017 of approximately 150,000 LTC.

Since then, LTC tokens have been much more active. However, the recent trend shows LTC holders are again beginning to horde their tokens, albeit not to the same degree as in late 2017.

The above suggests long-term holders are not selling their Litecoin, which may be another factor in Litecoin’s price resurgence besides stability.