Binance CEO CZ lashes out at Chinese media, The Block for spreading FUD 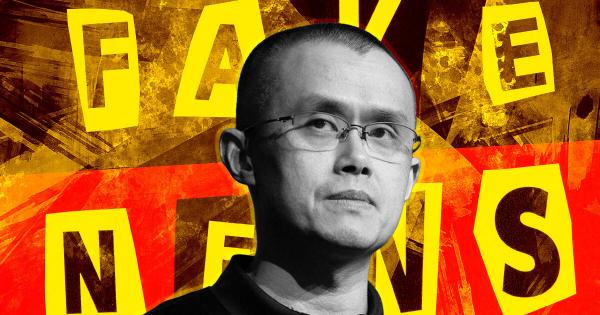 The CEO also reminded the crowd that the global crypto news site The Block also spread FUD on Binance by posting an article with a misleading title three years ago.

CZ came across the fake news from 163 at 8:40 UTC on Aug. 18. Five hours later, he posted a thread lashing out at both 163 and later the Block for spreading FUD and showing how the BNB price had responded. He also noted that the original article from 163 was deleted, but many copies of it still roamed the internet.

According to his thread, the news source 163 wrote:

“Changpeng Zhao, the founder of Binance, was arrested in the mansion during the FBI raid, and a room of BNB and BUSD was found in the basement of the mansion.”

CZ said the ridiculous reference to a “room full of BNB” should have signaled that the news was fake; however, it still spread quickly on the internet and social media groups.

CZ concluded his thread by stating that the global crypto news outlet The Block also spread FUD three years ago, which caused the BNB price to fall from $24 to $18, erasing about $400 million from the market cap.

Although he did not disclose the details of The Block’s article, CZ mentioned that the title spread FUD by saying that the police “raided” the Binance office. According to CZ, this article spread very quickly as well, and The Block only corrected the title to “visit by authorities” three days later.

The coldest winter in crypto history has given many exchange giants a hard time. However, judging by the news, Binance seems unaffected by the winter conditions.

A recent report by CryptoSlate showed that Binance’s Bitcoin holdings started to spike in May 2022 to reach above 623,000 Bitcoins.

The exchange is also continuing its investments and hiring new employees as if the market conditions are preem. According to CZ, Binance can even purchase exchanges that are having financial troubles due to the winter conditions.